In the installation of a storage system the recurring question is always the same: how much capacity shall I reserve to properly cover the loads? 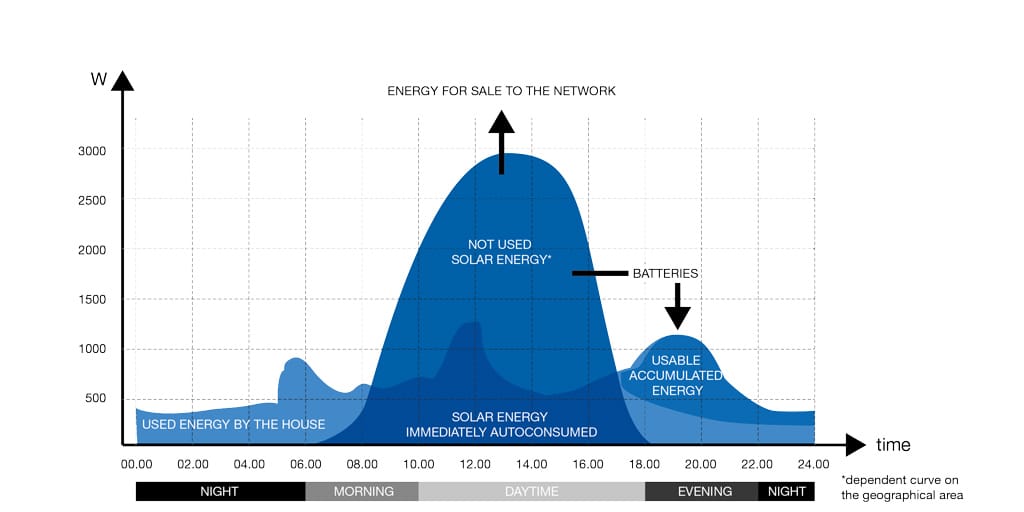 What could be a solution?

A first opportunity comes from the IOT (Internet of Things) technology. Through an intelligent load control system, this technology allows to activate some of the loads only in case there is adequate energy coverage.

A second opportunity comes from the electrical energy storage. When the photovoltaic system produces more energy than required by the home loads, all the excess energy is stored in a storage system and subsequently made available whenever needed (for example, in the evening hours, during the night or on rainy days with low irradiation).

Now, the question is: how to properly size the storage system for home use?

As mentioned, there are several elements that are difficult to determine such as:

For this reason, a first sizing can be made calibrating the storagen on the minimum of the values ​​between the amount of energy produced in excess during the day and the amount of energy consumed during the night times. This is a very prudent approach and sometimes could result in a  underestimation of the storage capacity: in our opinion, however, this is the best solution, along with the use of storage systems with scalar and modular capacity, which offer the possibility of being expanded in later on, if necessary.

Azzurro Storage System is the latest generation of Zucchetti Centro Sistemi inverters, the best solution to optimize energy independence in the residential sector. The wide range of Azzurro inverters will be the protagonist in various events: the most imminent is the conference "FV: opportunities for new plants and optimal management of existing ones" on April the 6th in Naples, promoted by the association Italia Solare, Cisolar 2018 exhibition in Kiev (12-13 April), Intersolar in Munich (20-22 June) and Key Energy in Rimini (6-9 November).